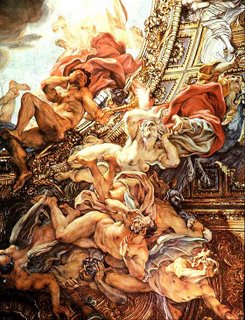 Jesus said to Nicodemus:“Just as Moses lifted up the serpent in the desert, so must the Son of Man be lifted up, so that everyone who believes in him may have
eternal life.”For God so loved the world that he gave his only Son, so that everyone who believes in him might not perish but might have eternal life.For
God did not send his Son into the world to condemn the world, but that the world might be saved through him.Whoever believes in him will not be condemned, but whoever does not believe has already been condemned, because he has not believed
in the name of the only Son of God.And this is the verdict,that the light came into the world, but people preferred darkness to light,because their works were
evil.For everyone who does wicked things hates the lightand does not come toward the light, so that his works might not be exposed.But whoever lives the truth comes to the light, so that his works may be clearly seen as done in God.

Since I'm fresh back from Rome, I cannot read this Sunday's Gospel without thinking of the ceiling of the Gesu in Rome. It is the triumph of the name of Jesus and it plays on the contrast between light and darkness...those who move toward the name are almost lost in the light, while those repelled by the name are in darkness and seem to be plunging downward and about to crash on those looking upward (one of the best 3-D images I've ever witnessed). And of course this image immediately impacts you the viewer..."am I drawn toward the name of Jesus or repelled by it"...now we all immediately might put ourselves in the "drawn towards" category, but don't be so quick to judge, but rather ask yourself "am I willing to die to myself and glorify the name of Jesus?"
Do I prefer the light that Jesus brings to the darkness of my intellect or do I prefer my thoughts to Jesus' teaching in the Gospel?

"'This is the judgment, the light came into the world but men preferred darkness.' What a tragedy!"

His simple "What a tragedy" gave me pause to think about the gravity of this choice and years later having witnessed the mother church of the Jesuits I can't help but think when he gave the homily that the image of the Gesu ceiling was in the back of his mind and those plunging souls falling to their own damnation because of their preference to darkness.

Last night I was reading a passage from a book on Monastic Practices, I believe written by a Cistercian and the passage was specifically about Vigils and keeping watch in the night. The monk talked about the deeds of darkness and how monks are called to watch and pray specifically for the Lord's coming in the midst of the night for all of those who may be plunging at that moment into the deeper darkness. Who knows how many souls have been saved because in some monastery at that "hour of darkness" monks were "watching and praying" per the Lord's command and light broke through and drew a soul toward the Name?